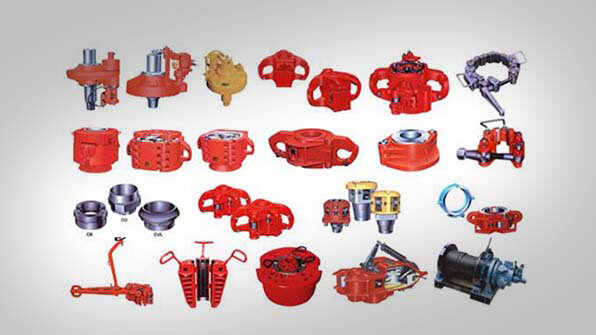 Handling Tools play a major part in any modern drilling operation. They are used for suspending, moving and rotating tubulars in and around the well center and on the drill floor.

Although the majority of these tools are used to dynamically suspend and move tubulars in a vertical direction, some tools, such as the SJH elevator, serve a wider array of function by moving tubulars from horizontal to vertical position.

catheads provide the force necessary to make up and breakout drill pipes and collars. The cathead is a drill floor mounted tool which, when working with manual rig tongs, provides the required torque.

Torque adjustment to meet make up or break out requirements

A smart catwalk machine offers safe and efficient transport of drill pipe, collars, casings, subs, and other equipment from the pipe deck to the drill floor.

Its new-generation design provides faster, smoother, and more flexible transport operations than traditional catwalks and normal rubber-type conveyor catwalks. The SmartCat catwalk machine carries up to four 6 5/8-in drill pipes at the same time, making it an ideal tool for stand building. 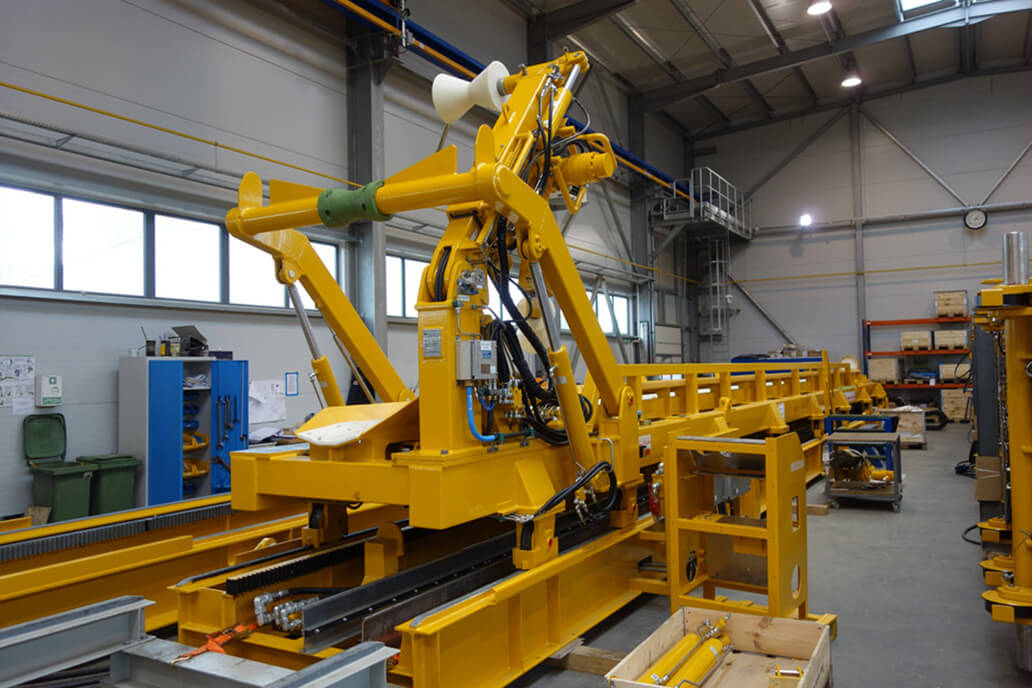 Designed for fully horizontal handling of drill pipe, the SmartCat catwalk machine can be used for loading and unloading from any of the pipe handling cranes. It travels on rails that run all the way from the pipe deck to the well center. The rails are normally flush mounted on the drill floor to allow smaller bits, subs and other equipment to be safely transported. The optional tail-in arm is used to guide the lower pin end of tubular pipes when moving from horizontal to vertical positions. The tail-in arm can be used to deliver drill pipe to the well center or a suitable stand building machine.

The SmartCat SC 10-45 catwalk machine is fully automated and delivered with a customizable local operator panel and control options. Its control system can be interfaced with other drill floor machines for a higher level of control 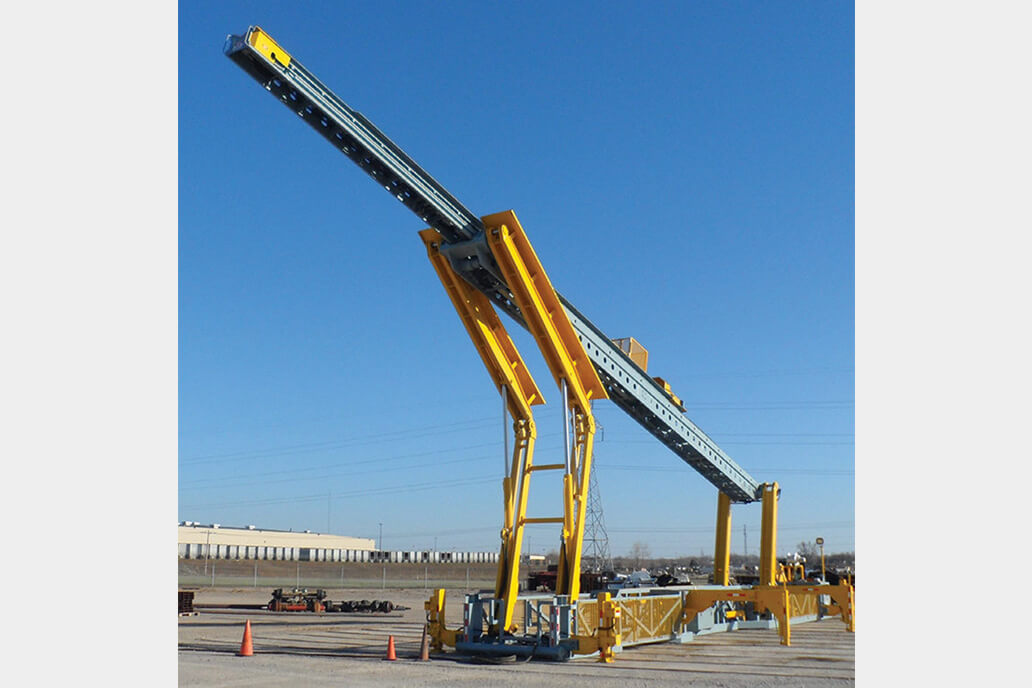 Horizontal handling of all drill pipe for improved overall safety and ease of operation.

Fully automated system that can be interfaced with other machines on the drill floor.

Skate system designed to prevent friction and damage to the conveyor system.

Prepared for hydraulic and/or pneumatic elevators

Crown block is placed on the top of the rig and changes the direction of force from the drew work. By set of cables, it is combined with travelling block and used for lifting tools and drill string. 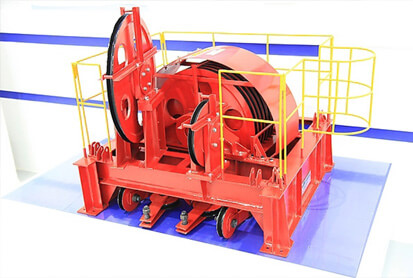 Each crown block sheave is machined from an integral steel alloy cast for enhanced strength.

Individual lubrication passage to each bearing for easy maintenance

Sheaves and bearings interchangeable with those of traveling blocks

Crown bumper to protect both the crown block and traveling block

In Offshore oil and gas, the term Travelling Block is used to reference the lower block of the main block and tackle hoisting system within the drilling derrick

Its main purpose is to hoist and lower the top drive and Drill Pipe within the derrick. The top drive is attached to the bottom of the Travelling Block.

The Traveling Block is attached via a steel cable to the above Crown Block.  This steel cable will continue back down the derrick where it is spooled by a powerful motor that sits to the back of the drill floor called the Draw Works

The elevator is used to latch around the top of pipe joints in the drill string. Once latched, the driller can raise and lower pipe in and out of the hole. Rig crews attach the elevator to the hook or Top Drive with two forged high-grade steel rods called links or bails. One end of the link fits into the link ears on the hook or Top Drive. Link locking arms secure the links into the ears. Crew members then attach the elevator to the other end of the links. Most elevators are hinged and rig crews open and close them by operating the latch with two handles on each side

Iron roughnecks are tools used in the drilling industry to connect and disconnect sections of drill pipe, or tubulars, and are used in drilling rigs. These machines assemble drilling pipes by clamping the lower pipe in place while a rotary wrench turns the upper pipe and threads it into the matching threads on the lower pipe. To replace a drill bit or upon completion of the well, the pipe is backed out of the well and the roughneck's job is completed in reverse. Iron roughnecks have eliminated this dangerous and unhealthy job for oilfield manual laborers, or human roughnecks. These machines are often automated and remotely controlled for greater worker safety.

The tool is two large sets of jaws, one on top of the other, held together by a common pivot shaft and frame. The iron roughneck has to correctly center the two pipes so the threads are not cross-threaded. Some iron roughnecks have a third jaw.

The jaws are first opened to wrap the roughneck around the two sections of pipe, then clamped together to grab the pipe sections and commence the process. The lower set of jaws grabs and holds the pipe already in the well hole in place. The lower section has the female threads, and the male threaded pin end of the pipe, or tubular, screws into the lower tubular.

The turning-twisting of the upper pipe stops when the wrench’s torque reaches its preset torque limit. The two pipe sections are then locked together tightly for the last 100 degrees of rotation by the upper jaw, which can deliver much higher torque than the rotary wrench. To remove the pipes, or tubulars, the iron roughneck process is reversed, except that the upper jaw first breaks the threads apart then the rotary wrench takes over to spin the male threads all the way out of the box end, or female threads.

The two main specifications for iron roughnecks are the width of the pipe and the torque needed to tighten it. Almost all iron roughnecks can accommodate a wide range of both widths and torques.

Horizontal Travel: up to 40”

Vertical Travel, or how far the pipe can be screwed in or out

Hydraulic pressure, up to 3000 psi

Weight of apparatus: 4 to 6 US tons 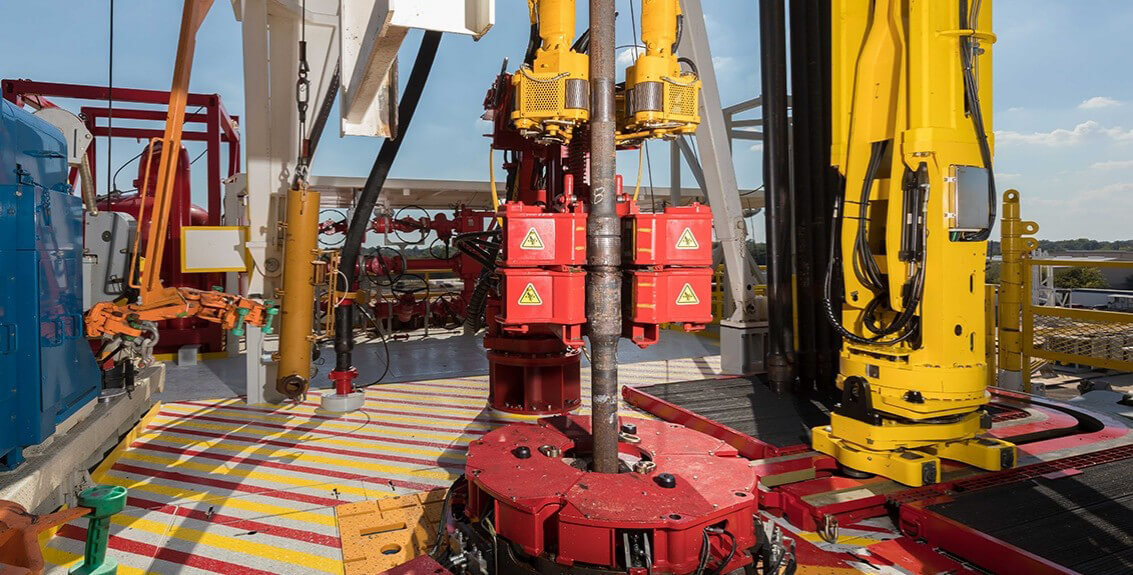